Peshwa Bajirao I – The Man of Battlefield 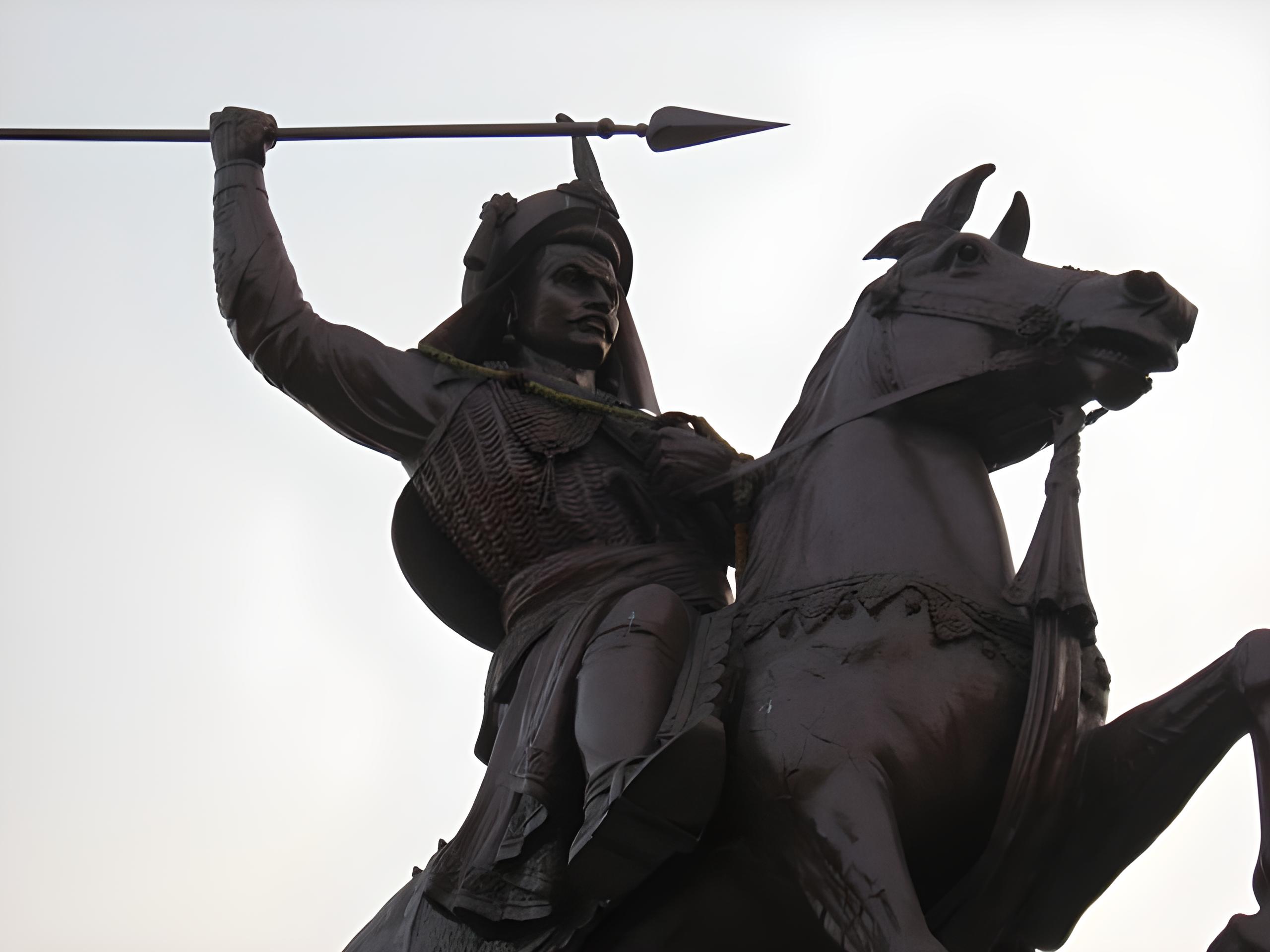 This is the biography of a legendary Maratha warrior named Peshwa Bajirao. He was Peshwa Bajirao Ballal in historical records. However, others would refer to him as Rau. His brief existence, from August 1700 to April 1740, was fantastic. Bajirao elevated Maratha to greater heights that left its mark on history.

Bajirao’s parents are said to have come from a Brahmin family. His father was also prominent in the community and served as a Peshwa during the Chhatrapati Shahu reign.

Bajirao grew up close to his father and greatly admired the lives of other great leaders of the Maratha kingdom, like Shivaji Maharaji and others.

Being in a Brahmin family, he had to learn writing, reading, and Sanskrit. However, Bajirao was not so much interested in writing and reading books. So, apart from reading and writing, he also got well trained as a warrior and a great diplomat.

At a very young age, Bajirao started showing interest in Military activities. He started joining his father in military missions. One time his father got arrested and detained. Bajirao was still with him when all that happened. His father was later set free.

When his father went to the battlefield, this skilled warrior would go with him. When his father, Peshwa Vishwanath, passed away in 1720, he was automatically made the Peshwa of the Maratha Kingdom. By then, he was 20 years old.

Since a young man was appointed Peshwa, several senior members opposed him. On the other hand, Nizam was increasing his empire while the Mughals lost their grip on the other side. This was when Chhatrapati Shahu Maharaji was ruling from Satara, Maharashtra. With the arrival of Peshwa Bajirao, Pune became the capital.

Bajirao had two wives. His first wife, Kashibai, came from a wealthy family, and the father was Mahadji Joshi. Bajirao was now old enough to settle and moved in with Kashibai. He was always responsible and loved his wife genuinely. He respected her, and they lived happily as a couple.

Soon after, the couple was blessed with four sons. However, one of his sons, Janardhan Rao, died at a very tender age. Nanasaheb, his firstborn, succeeded his father as a Peshwa after his death.

Bajirao also had a second wife called Mastani. She was a daughter to one of the prominent rulers of Rajput, popularly known as Chhatrasal. This union was based on political interests. It was meant to appease the ruler, Chhatrasal.

Mastani gave birth to first child in year 1734 who known as Krishna Rao. Because Mastani was a Muslim, and the Hindu priest was adamant about performing the Upanayana initiation to Krishna. Hence later his father renamed his name as Shamsher Bahadur.

Check out detailed real story of Bajirao Mastani. It will give you overview of relationship of Peshwa Bajirao and Mastani. Also it will clarify how realsed film was far more different than our real history.

When Bajirao and Mastani died, Shamsher Bahadur was young and could not be alone. Therefore, Kashbai, his stepmother, adopted him. As expected, Shamsher was entitled to his father’s property and rulership. When he got of age, he got his share. he oversaw Kalpi and Banda.

The Marathas and Afghans got into a conflict in 1761, and Bajirao and his men were involved. Unfortunately, His half-brother Shamsher sustained injuries and died in the battle.

In 1728 Bajirao relocated his administrative center to Pune. This was a plan to make Kasba a significant capital. He started their work from Shaniwar Wada in 1730.  But later ​in 1732 Peshwas took full control on its completion.

Bajirao getting on the position of a Peshwa came from his father’s demise in 1720. His appointment to succeed his father as the Peshwa of the Maratha empire ignited criticism. Even though familial connections could have played a role in the process, he was a qualified candidate for the position.

His father, the previous Peshwa of the Maratha Kingdom, had genuinely served the kingdom with a lot of commitment. So, when Balaji Vishwanath passed on, Chhatrapati Shahu, the reigning king of the Marathas, genuinely had a stand that he had sacrificed a lot for the empire and didn’t enjoy the fruits of being a Peshwa. To show respect to the departed Peshwa, Balaji, Chhatrapati Shahu decided to appoint Bajirao to take over his father in the Peshwaship duties.

Some seniors in Shahu’s government saw Bajirao as too young and rushed to handle the Peshwa position. They heavily criticized him. However, Chhatrapati Shahu believed in Bajirao and gave him a probation period of a couple of years. If, by the end of the probation period, Bajirao proved Incompetent for the position, he would immediately appoint someone else.

Shahu was a great and skilled observer of people and had a habit of appointing the right people for senior positions in his government. However, he seemed uninformed about Bajirao’s capability and great passion for the military. In addition, he was already thoroughly trained by his father. So definitely, Bajirao passed the probation evaluation and kept the Peshwaship.

During his reign as the Peshwa, Bajirao showed a lot of capability and know-how for the task. His command was unshakable, giving the Maratha kingdom’s people a revamped energy. He was determined to bring victory to Maratha and even acquired new territories for the empire and protected the existing ones.

Bajirao was a successful military leader, and the more he gained popularity, the more enemies he got. He had a significant number of enemies from both the Maratha Kingdom and beyond.

For instance, Senapati Trimbak did not get along well with Bajirao simply because he was jealous of him. Senapati was a general in the Maratha empire and envied Bajirao for his success as the Peshwa of the Marathas.

On the other hand, Pratinidhi Sripat also had misunderstandings with Bajirao. He was also a general then and always disagreed with Bajirao over state policies.

From the external side, Nizam, the founder of Hyderabad, was one of the biggest enemies of Bajirao. Nizam differed with Bajirao when he declared unwilling not to pay Chauth. This was a levy paid by all districts that the Marathas controlled. It was said to be for Overlordship. Nizam was one of the most skilled and diplomatic Mughal commanders. However, his state was still new and unstable. Hence, it could withstand the powerful Marathas. So, Nizam strongly opposed the Marathas in their quest to extend their power into his territory. And Bajirao was up for the challenge from this determined Militant, Nizam.

Bajirao had one assurance that the Mughals were gradually becoming weak and disintegration was now evident. So, he decided to use the opportunity by extending his powers to the Mughals.

Nizam was constantly on the run to defeat Rao. He once attempted to turn Senapati Trimbak and a few other seniors against Bajirao so that he could get an opportunity to strike. But Peshwa Bajirao was too smart to be tricked. He put off all his plans.

One time Bajirao went to spend time in Karnataka. Nizam was alert enough to notice this and took it as an opportunity to strike the Marathas. When Bajirao returned home, he immediately commenced his mission to fight Nizam back. This happened between 1726 and 1727. The fight continued for a year or so, and as expected, Nizam lost. He later decided to sign a treaty and started paying Chauth. It was finally a win for Bajirao.

It was under the leadership of Bajirao that the Marathas got their way into the Northern part of India. First, it started with Gujarat. They made their first attack in 1723 and managed to win them by 1727. The next in line was Malwa which also got under the Maratha power by 1738 when the Durai-Sarai treaty was signed.

Soon afterward, Bajirao managed to acquire almost half of Chhatrasal. This came in as compensation for helping them defeat the Mughals. Bajirao continued with his mission to conquer the north and eventually acquired most of it.

Maratha’s Supremacy was rapidly spreading throughout India, and Bajirao didn’t rest. Soon, he got to Konkan. He was powerful, and the Siddis had no choice but to accept defeat and allow Maratha to take over Konkan.

Senapati’s opposition to Bajirao was inherited from his father. It was always Bajirao’s desire that they both get to enjoy the rulership of Malwa and Gujarat together. However, Senapati wanted to have a clear cut of the regions to himself alone. This dispute finally led to a fight that took place at Dabhai in the year 1731. However, Trimbak was overpowered and killed in the course of the fight. Again, Bajirao got a remarkable victory.

Bajirao attacked Hyderabad in 1740 to retrieve his Jagir from Nasir Jang, Nizam’s son. This was his last trip, for he never returned to Maratha alive. Note that Bajirao was not killed but died of an illness.

The rise of the Marathas as a dominant force in India was largely due to Bajirao’s efforts and commitment. Through his leadership and outstanding command, Maratha acquired a lot of victories and ranked top among the powerful Peshwas of the Maratha Kingdom.