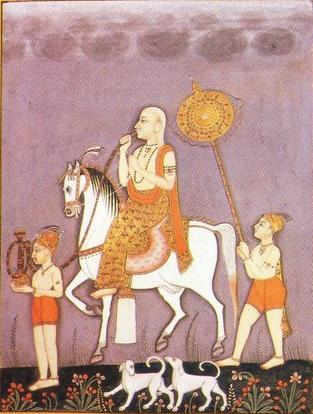 Shahu was the son of Chhatrapati Sambhaji Raje and Queen Yesubai. Shahu Maharaj was born at Gangoli Fort, Mangaon in 1682. He was recognized as the grandson of the Great Chhatrapati Shivaji Maharaj and fifth great Maratha king. He was a king who saw the Golden age of Maratha empire and became emperor with help of Peshwa Bajirao.

After the execution of his father Mughals attacked and took control of Raigad fort. So, Shahu Maharaj at the age of 7 gets captured with his mother and remained at Agra as a detenu. In consequence Shahu was raised in the imprisonment of the Mughals.

Aurangzeb wanted Shahu to adapt Islam, but at the request of his daughter Zinatunnisa, he agreed to convert Prataprao Gujar’s son Khanderao Gujar instead. It is said that Aurangzeb named the boy ‘Changle’. Later it changed to Shahu and then it remained the same till the end of the King.

In 1707 After Aurangzeb’s death, Shahu was released (May 18, 1707) by Prince Azam son of Aurangzeb’s general Zulfiqar Khan on his advice. Prince Azam gave Shahu a royal charter, a Maratha Bodyguards and a group (which included Mahadaji Krishna Joshi and Gadadhar Pralhad Nasikkar).

He also gave Sardeshmukhi (revenue recovery) rights to six Deccan Subhas, including Gujarat, Gondwana and Thanjavar. with the help of Sardar Mohan Singh Rawal of Bijgad, Shahu gathered a small force on the road. The idea was to prove that there was goodwill towards the Marathas and that there might be a fear of war in the Marathi camp for a Successor.

Possibly the queen who had secretly become the queen, denied Shahu’s right to the throne. But it should be noted that Tarabai’s husband Rajaram had earlier claimed that as long as Shahu was in Mughal captivity, he was only running the state as Shahu’s representative.

Although Tarabai denied the claim, some of the Maratha’s like Amrutrao Kadam Bande, Sujan Singh Rawal, Nemaji Shinde, Bokil, and Purandare decided to join Shahu Maharaj.

Meanwhile, after the removal of Azam from Ahmednagar and Kambaksh from Hyderabad, Bahadur Shah who also known as Muazzam was appointed as an emperor of Delhi. Bahadur Shah (Shah Alam) maintained the distance between the two and Prince Azam did not bind himself to the promise he made to Shahu.

A vicious battle emerges between Shahu and Tarabai for the post of successor. Another claimant was Sambhaji, the second son of Rajaram and Queen Rajasbai.

Shahu’s mother Yesubai remained in captivity till 1719 in exchange for Shahu’s good relations with the Mughals (Shahu’s wife Savitribai and half-brother Madan Singh also remained captives of the Mughals). When the power of the Marathas was strengthened, the Marathas forced the Mughals to release the Queen Savitribai unconditionally.

You may also like to read: Shahu of Kolhapur

At the age of 26, Shahu succeeded in acquiring the Maratha throne with the help of the clever and diplomatic Balaji Vishwanath.

The enemy of Shahu

Balaji Vishwanath sided many of the sardars like Dhanaji Jadhav of Tarabai towards Shahu and forced Tarabai to compromise. Tarabai accepted Shahu Maharaj as the king of the Marathas after granting permission to allow to establish a small princely state named Kolhapur. So, Kolhapur became second throne of Marathas where she coronated her son Shivaji-II and established their own kingdom.

In 1713, Kanhoji Angre, an ally of Tarabai, made a swift attack on Satara and succeeded in capturing Bahiroji Pingale who was the Peshwa of Shahu. After that, Shahu gave his own Peshwa title to Balaji Vishwanath.

Balaji Vishwanath himself pursued Kanhoji Angre to Lohgad and his headquarters and kept him in a precarious position. Balaji understood the importance of Kanhoji Angre’s, so Balaji preferred diplomacy to defeating him as an enemy. In return for accepting Shahu as ruler, Angre was allowed to keep Angre’s belongings with him and was given the name Maratha Sarkhel (Admiral).

Balaji defeated some reckless chiefs like Dhamaji Thorat, Krishnarao Khatavkar, Chandrasen Jadhav, Pant Pratinidhi, Santaji Jadhav and Udaji Chavan and kept his lordship unaffected. After the death of Chhatrapati Shahu, when the kings of Satara remained only nominal, the real power was exercised by the Peshwas.

The Rule of Chhatrapati Shahu Maharaj

Shahu was a charismatic and benevolent king. Shahu soon succeeded in gaining the allegiance of many powerful people (such as Bhosale, Holkar, Shinde, Gaikwad, etc. of Nagpur province) who maintained Maratha dominance during Shahu’s rule.

Maratha domination extended beyond the borders of Maharashtra and into the western states of Gujarat, few parts of central India (Madhya Pradesh and Jharkhand), to the east (Orissa and Bengal) and to the north to Tamil Nadu and south to Karnataka. They ruled over several provinces (Indore, Baroda and Gwalior) in different parts of India and collected a quarter (revenue) from several states.

Although Shahu officially declared his allegiance to the emperor of Delhi, it was a fact that the emperor was looking to the Marathas for his own protection. The Marathas played an important role in establishing and consolidating the power of the emperors at Delhi.

Shahu Maharaj died at age of 67 in 1749 at Rangmahal Palace, Satara.