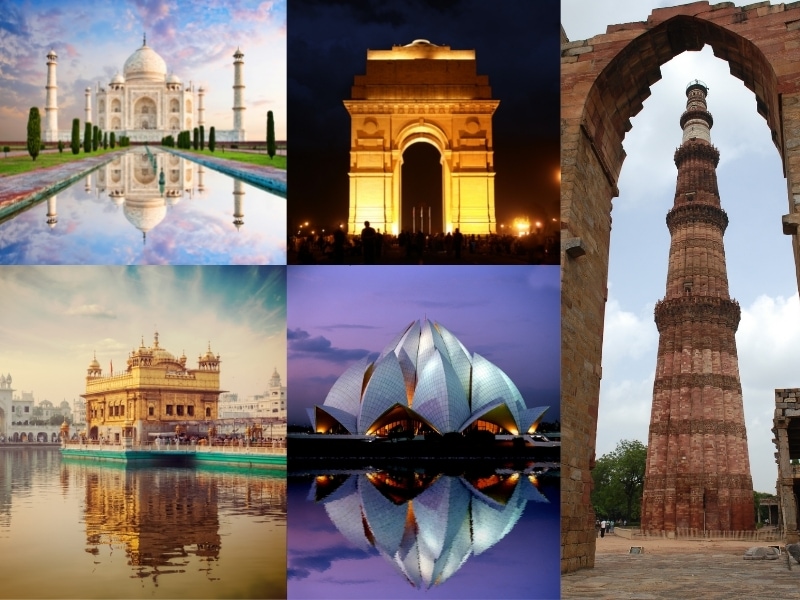 Today, I am going to share with you the most famous monuments of India which have a glorious historical past. Those Indian monuments are scattered all over the Indian subcontinent.

India has a great historical background and monuments of India plays vital role in Indian History.

So, if you are planning any trip then you get to see the many historical places of India. Thousands of foreigners and Indians give visit to this place everyday.

Those monuments of India has scattered from the east coastal India to the western Bay of Bengal and north Himalayas to southern Gangotri.

Regardless of wind, hot summer, rain, they are still stand to testify the glorious history of hundreds of years ago.

Incredible monuments of India are located in the different form of architecture. So, you can find it in the form of temples, forts, palaces, museums, etc.

Out of those Indian monuments, many architectures remained hidden from the world due to historical insignificance. On the other hand, some places are very popular in the whole world.

So, you might saw them in books, blogs, news, videos or television. We have listing here some of the important monuments of India that everyone should visit at least once.

There were so many Monuments in India that plays vital role in History of India. Therefore, Those monuments are important for study of Indian History.

Taj Mahal is called the “Monument of Love.” The Taj Mahal is considered as most beautiful architectural monuments of India. Therefore, it is famous place worldwide situated in city of Agra with great historical significance.

Why this building had built is a controversial topic. However, it had believed that Shahjahan built the monument in memory of his third wife named “Mumtaz Mahal.” The Taj Mahal consists mainly of the tombs of Mumtaz Mahal and Shah Jahan.

The whitish marble building on the banks of the river Yamuna is the centre of attraction for tourists all around the world.

Extensive gardens, circular domes, towers and mesh carvings are considered to be the features of Mughal architecture. The three adjoining walls include a large garden, a guest house and a mosque.

This is the most famous over all Monuments of India. Every year around 70 to 80 lakh worldwide tourists are attracted to visit Taj Mahal.

The total cost of the building, which covers an area of ​​2 hectares, was Rs 52.8 billion ($ 827 million), which meant Rs 82.7 Crores. New Seven Wonders Foundation has selected as winner of 7th memorial.

Construction of the Taj Mahal, started in year 1632 CE. The construction is completed in year 1653 CE means it took around 21 years to complete the whole structure. The architecture of this courtyard is rectangular and has large gates to access.

Upon entering through the gate, the fountains in front and the spectacular Taj Mahal gives peace of mind. The interior architecture is equally charming along with the exterior beauty.

The Taj Mahal was declared a World Heritage Site by UNESCO in 1983 CE. This monuments of India is also an outstanding model that represents Islamic India.

The Qutb Minar has always been a tourist attraction and known as one of famous monuments of India. This monument is built-in medieval times.

A minaret is a mosque shaped object that includes the foundation, the steps for climbing, the circular roof, and the summit.

In the face of many natural disasters, this monument stands as a testimony to India’s glorious history. UNESCO declares Qutub Minar at Mehrauli as a World Heritage Site.

Among few Mouments of India Qutub Minar is built by mamluk dynasty’s Qutbuddin Aibak. Qutbuddin Aibak, the founder of the sultanate in Delhi, started construction of the Qutb Minar in 1929.

Qutbuddin Aibak had a career spanning six to eight. The later rulers completed half the remains of the Qutub Minar.

The height of the family minaret is about 5 meters, and the diameter is 1.5 meters (5 feet). As the peak approaches, its diameter decreases. At the top of the tower, it has a diameter of 5.5 meters (3 feet).

The Qutub Minar is a marvellous piece of architecture, and its charming carvings attract tourists. It is here that other than this Qutb Minar, other buildings prove the progress made by medieval architecture.

Ironstone is an incredible example of medieval metal. Wool and rain do not affect this column. The feature of this pillar is the iron, though it has not yet rusted. Besides, there are many antique buildings such as the Alai Darwaza.

As you move around, the magnificent architecture and its design compel you to admire the ancient art. The Qutub Festival is a special event for tourists. In which, the importance and information of the objects herein are revealed.

India Gate is a war memorial designed by the English architect Sir Edwin Lutyens. The magnificent nature of India Gate has enhanced the beauty of the highway.

The monument that look like the India Gate are the Arch de Triomphe in France, the Arch of Constantine in Rome, and the Gateway of India in Mumbai.

Often it is difficult to tell the difference between these monuments. The Delhi Gate, which is only 5 meters high, is celebrated every year on the 5th of January.

India Gate was built to commemorate the British and Indian martyrs of World War I and the Third Anglo-Afghan War.

Almost two soldiers of Indians and British martyred. Significantly, there are 1,3 soldiers newly carved on this monument.

The monument laid in 1959, and the construction was completed in 1949, just two years later. Lord Irwin, the then British Governor of India, inaugurated the monument. These will indeed be a memorial for architectural lovers.

The country of India has enjoyed spiritual history since ancient times. Golden Temple in the area known as “Harmandir Sahib” or “Darbar Sahib” is a sacred shrine of Sikh religious people. The sanctity of this temple, which cannot describe, can only be experienced.

After the political unrest and wartime of the nineteenth century, the temple was rebuilt by Maharaja Ranjit Singh in 7 years.

The temple constructed of marble and gold. The water that cools the eyes around the temple and the magnificent gold temple in the middle creates immense consciousness in mind.

People of all religions visit this golden temple in the middle of Amritsar city and experience different religious happiness. This temple considered as a symbol of equality.

On the 8th of December, on the instructions of Ram Das, the fourth Guru of the Sikhs, the Amrit lake was excavated.

In the middle of the lake is the Golden Temple. There are many small monuments around the nectarine lake. It was from this nectar lake that the city was named Amritsar.

During the Mughal period, the British suffered many atrocities. The Sikhs who suffered the injustice can be seen here in the Sikh Museum at Clock Tower in Amritsar.

To the south-east of the Amrit lake, you find a magnificent Ramgarhia Bunga fort. Around this fort, there are minarets of Muslim architecture. The Golden Temple in Amritsar is truly a beautiful art form in the world.

The Gateway of India is an impressive combination of Western, Arabic and Indian architecture. Built-in 1969, the monument is built on the port of Apollo. British architect George Witte designed the magnificent memorial.

The memorial was erected to commemorate the visit of King George VI and Queen Mary to Mumbai. It is a favourite tourist destination of Mumbai.

Many foreign tourists visit this monument along with tourists from India. There is where boating services go to Elephanta Cavs.

The Gateway of India, which started in 1959, was completed in 1949, just two years later. The construction of this strong structure made of solid concrete and basalt. It has also carved beautifully.

The monument was used for transportation for some time before the year 1949 before India became independent. It was from the Gateway of India that the last English ship Ravana left for England.

After the evening, the Gateway of India get illuminates with colourful lights. Hundreds of people came here each evening to see this picturesque scene.

Also, this is where you get to see two old five-star hotels. One is Hotel Taj, and the other is the Hotel Oberoi. High quality Indian and foreign tourists prefer to stay at these hotels.

The Lotus Temple, located in Bahapu village, New Delhi, is a lotus shape. Hence it is called Lotus Temple. The white lotus petals that make the lotus shine are spectacular in the colourful lights at night.

No idol is worshipped in this temple dedicated to the Baha’i religion and open to all the righteous.

This temple is a beautiful example of architecture. This temple is striving for world unity, irrespective of caste, creed, creed, nationality. It is one of the seven Baha’i places of worship around the world.

Delhi is the first temple in Delhi to use solar energy. With solar energy consumption, this temple saves 1440000 Indian rupees ($ 20422.4) annually.

Among the all Monuments of India is the first monument which uses Solar Energy. The entrancing peacock statues at the gate look very attractive as you enter the temple area.

Both sides of the path leading to the temple have adorned with lush green lawns and shrubs. Also, the colorful flowers add to the beauty of the area.

The serene atmosphere of the temple is nourishing for chanting, penance, meditation. The unique architecture inside is an attraction for all. You can study, read, and write any religious book in a quiet environment.

Sacred music is allowed, to be heard, in the vicinity of the temple. Kamal Temple is a great place to experience spiritual happiness in a happy and peaceful environment.

I hope you like the article. Hope you will support us to provide free information. So, Please don’t forget to share this article with friends & family.

The New Seven Wonders Foundation had launched in Switzerland under the leadership of Canadian-Swiss Bernard Weber.

Every year, the organization selects a beautiful memorial based on public opinion out of the eight existing monuments.