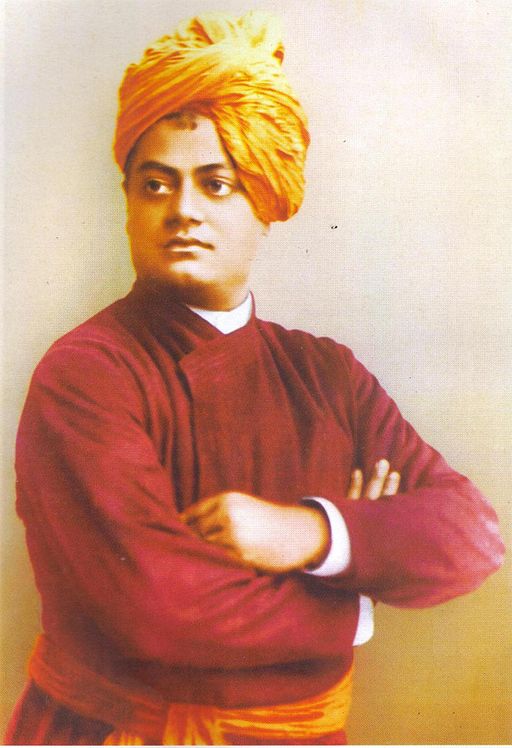 Today, I am going to provide you an Information of Swami Vivekananda who was recognized as great philosopher, nationalist and monk of India.

He was born on the occasion of Makar Sankranti on January 12, 1863, in Calcutta, West Bengal. Parents named him as Narendranath Datta.

The most noteworthy thing is his birth anniversary celebrated at “National Youth Day.”

Arise, Awake and stop not till goal is achieved.

Birth and childhood of Vivekananda elapsed in his ancestral home at Calcutta, West Bengal. Calcutta was the capital of India under the British. Seeing the monks, Vivekananda gets enchanted. As a child, Narendra was impatient and naughty.

Therefore, his parents were fed up with him. It was challenging for them to control Narendra.
Vivekananda’s mother said, “I devoted to Shiva for the child, and God sent me one of his demons.

He was from a very conventional family background. Vivekananda had a total of nine siblings, including him.

Firstly, Vishwanath Datta was his father, who was an advocate in the High court of Calcutta.
Secondly, Vivekananda’s mother’s name was Bhubaneswari Devi.
Above all, his father had a very logical attitude. On the other hand, his mother was devotional.

As a result, that contrast nature of parents helped Swami Vivekananda to develop his personality and way of thinking.
His Grandfather named Durgacharan Datta was a scholar of Persian and Sanskrit. He left his home and family at the age of 25 to became a monk.

At the age of 8 years, Vivekananda joined the Metropolitan Institute of Ishwar Chandra Vidyasagar. In that institute, he attended his school. Meanwhile, he, along with his family, migrated to Raipur in the year 1877. After some period, he returned with his family to Calcutta. The most noteworthy thing was he was the only candidate who received the first-class marks in the entrance exam of Presidency College.

You may also like the Marvelous History about Sai Baba.

He was enthusiastic about reading a broad range of subjects. He liked to read books on religion, philosophy, social science, history, literature, and art. Hindu scriptures like Ramayana, Mahabharata, Bhagavad Gita, Puranas, and Upanishads had made him fascinated.

Furthermore, he was a multitalented personality. Firstly, he has learned the Indian Classical Music. Even more, he daily took part in sports, exercise. Sometimes in organized activities to stay active.

He was very interested to learn new subjects. He joined the Institution of General Assembly (Scottish Church College). Where he studied Western Philosophy and logic along with History of Europe. At the age of 18, in the year 1881, he acquired his Bachelor of Arts degree in Fine Arts.

Spencer was an English biologist, philosopher, anthropologist, prominent classical liberal political theorist, and sociologist. Vivekananda overwhelms with reading his evolutionism theory. As a result, Swami Vivekananda translated Spencer’s book into the Bengali language. During the learning of Western philosophers, he also studied Bengali literature along with Sanskrit scriptures.

Subsequently, he became interested in Spirituality. So, he inclined his interest to the next level, for that he became a disciple of Paramahansa. Ramakrishna Paramahansa taught him all living beings were an embodiment of divine soul. Therefore, service to a lord can be done with servicing to human beings.

After the death of Ramakrishna (Guru), Vivekananda travels throughout India to gain the first sight knowledge of situations in British India. Vivekananda’s master played vital role in becoming monk.

He made the sword of patriotism sharp to oust out the roots of British colonialism from India. So, India recognized him as the patriotic sage. As, he spread the philosophy of Hindu religions in Western countries. He played a leading role in introducing the Indian philosophies of Yoga and Vedanta (theology) to Western countries. For that, he gave public lectures and classes.

This was a famous incident in the life of Swami Vivekananda. When he was giving a speech in America, he started his speech with respectful words, “My dear brothers and sisters of America.” This simple thing was really new for western countries. In that speech, he informed about Hinduism. This speech was given in the year 1893 at the Parliament of the World’s religions in Chicago.

When he was young, he liked the religionism along with meditating in front of images of God like Rama, Mahavir Hanuman, Sita, Shiva, etc.

On the day of his death, on July 4, 1902, he arose early in the morning. Then, he went to a convent named Belur Math, where he meditated for almost three hours. After that, he taught Philosophy of Yoga, Sanskrit grammar, and Shukla-Yajur-Veda to his disciples. Later, he deliberated with his colleagues at Vedic college of Ramakrishna Math.

Vivekananda asked not to disturb him and went to his room at 7:00 pm. Meanwhile, he died at 9:20 pm while meditating. Therefore, His disciples considered that Swami Vivekananda attains the stage of Maha-Samadhi.

Reason of Death According to Medical Science

According to medical reports, the blood vessels of his brain get ruptured.

Reason of Death According to his Disciples

Pupils of Vivekananda believed that blood vessels of the brain ruptured because he activated his last chakra of Kundalini named Brahmarandhra. According to them, this chakra lies in the area of the fontanel bone at the crown of the head. This Brahmarandhra Chakra also called the opening of Brahma.

Vivekananda already declared that he would not live for forty years. Finally, he had given final rites on the banks of river Ganga. Where his Guru Ramakrishna Paramahansa was cremated 16 years ago.

I hope you like the Information of Swami Vivekananda who worked as Indian monk, patriot and great philosopher.