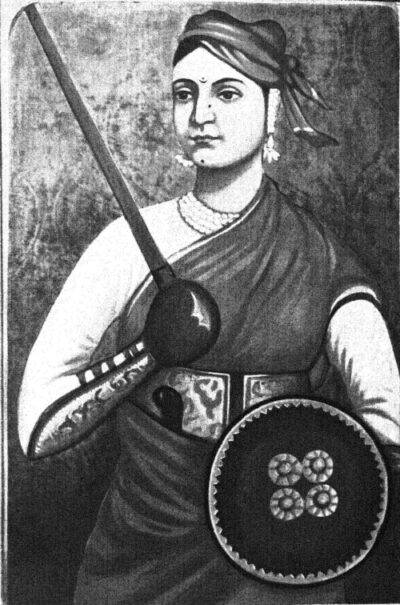 Today, I am sharing the Rani Laxmi bai Biography with you, which really energizes you with patriotism. So, let us start with the History of the Queen of Jhansi.

who was rani laxmi bai?

Indian Queen of Jhansi who became rebellion against British Monarchy. She fought three wars in her lifetime.

Though she does not won the battle against British, she identified as the great women revolutionary.

There are two theories behind the death of Rani Laxmi Bai.

First theory tells that she asked the Christian priests to fire the pyre on which she seated on.

Second theory is that she died because, on her Britisher fired a bullet. This theory mentioned in the British records.

There were two ways you can wear the saree.

First easy way is to get one ready made piece from online stores.

Second way is to get one Nauvari saree and wear the Nauvari with help of tutorials.

Special Tip: You can also sew that saree offline from your favorite tailor. So you do not have to struggle while wearing it.

Some people believed it as conspiracy and he may be poisoned to acquire the thone of Jhansi.

After death of Damodarrao, she adopted the child Anandrao who was the son of cousin of her husband.

Laxmi Bai is popularly known as “The Queen of Jhansi.” She is remembered in Indian History as a skilled ruler and loyal patriot.

She was also known as Manikarnika is her real name before marriage. But most popularly, people know her after marriage name called Laxmi Bai.

Because of her bravery, most of the time, the name of Laxmi Bai is associated with the empowerment of women.

This ultimately made her one of the true revolutionaries of India.

Before of Rani Laxmi bai

It was a time when the British monarchy was well established in Indian territory.

The Marathas, who were unbeatable for almost 50 years before British rule, were also subordinate to the East India Company.

The military base of the Peshwa, known as “Shaniwar Wada.” That stronghold of the Maratha Empire was also under the rule of the East India Company.

While in Varanasi, the Wife of Moropant, Bhagirathi Bai, gave birth to a child daughter.

The Moropant named his daughter “Manikarnika.” Manikarnika means as a bejeweled earring. Manikarnika was usually called with the nickname Manu.

Suddenly while in Varanasi, Chimaji Appa died. Then Peshwa migrated to “Bithur” in Uttar Pradesh. Moropant also went to Bithur along with Peshwa to assist in the work of Peshwa.

Queen of Jhansi fought against the British East India Company to defend Jhansi. First Battle at Jhansi was fought on March 24, 1858, but she failed in her mission.

So, she has to went to Kalpi to join the army of Tatya Tope and Nana Saheb.

Rani Laxmi Bai, along with Tatya Tope and Nana Saheb, fought with Britishers on May 22, 1858. But, rebellions were failed in defending the British army and have to run away to Gwalior.

This battle was fought in Gwalior near Phool Bagh on June 16, 1858. Rani Laxmi Bai led the Battle of Gwalior, and this became her last battle.

She gets seriously injured during the battle, and she died due to shooting a bullet. (Source: British Records)

Childhood of the Rani Laxmi Bai

Manikarnika’s whole childhood pass in the Palace of Peshwa. So, Tatya Tope and the son of Peshwas, Nana Saheb (adopted), were her childhood friends of Manikarnika.

Since her childhood, Manikarnika had a sporty and courageous attitude. Therefore, Peshwa used to call her “Chabili.”

Since Laxmi bai’s Childhood, Moropanta had told her stories about Chhatrapati Shivaji Raje Bhosale and the patriots of India.

He also taught about the importance of patriotism and independence.

In those days of Indian society, people were not teaching girls. But Manu was love to read and write.

The more noticeable thing was she leads in sports such as swordsmanship, Malla Khamba, and Horse Chesal.

Marriage of the Manikarnika

In May 1942, Manikarnika was married to Maharaja Gangadharrao Nevalkar of Jhansi.

After marriage, according to the tradition of Jhansi province, Manikarnika has given a new name as “Rani Laxmi Bai.”

Not only before marriage but also After the wedding, Laxmi bai use to horse ride.

In the Palace, there was a stable where highborn horses possessed. Among those horses, Pavaan, Sarangi, and Badal were especially dear to Rani Laxmi Bai.

According to historians, to save Rani Laxmi bai, her horse named Badal had jumped from the castle wall. Afterward, Rani Laxmi Bai ran out of the Fort, far away from the reach of enemies.

In the year 1851, Gangadharao and Laxmi bai gave birth to a child. They named their son “Damodarrao.” But this happiness not lasts long because the child died prematurely.

After the death of their son, Gangadharao adopted the son of a cousin called “Anandrao.”

In memory of dead son, the Maharaja Gangadharao had given name as Damodara Rao to Anandarao.

In November 1853, Gangadharrao died unexpectedly. Until this moment, Queen Laxmi bai not agreed with the idea of rebelling against the British.

Finally, British governor General Lord Dalhousie gave the reason that Damodara Rao was an adopted son of Gangadharrao and rejected his claim on the throne of Jhansi.

Dalhousie abruptly applied the policy termed as “Doctrine of Lapse.”

When Rani Laxmi bai informed about this, she angrily shouted,

I will not give my Jhansi!

This policy made Rani Laxmi bai a brave rebellion.

After some period, Laxmi Bai was forced to leave Palace and the Fort. So, in March 1854 CE, she left the Palace of Jhansi.

British East India Company admitted her to gave a pension of Rupees 60000 per annum. Then, Laxmi bai stayed in Jhansi and started preparing for the revolt.

According to the Marathi writer Vishnu Bhatt Godse, Rani Laxmi Bai liked the sports of steeplechase and wrestling.

Also, she was accustom to exercise early in the morning before breakfast.

Her sharpness, intelligence, and humble disposition had made her personality unique from other women.

The revolt began on 10th May 1857 in Meerut. Laxmi bai told Captain Alexander Skene to send troops for self-defense.

Here in the city, Laxmi bai had organized the Haldi-Kumkum program to inspire the citizen of Jhansi.

She said to people that the Britisher was a coward. So, no one needs to be scared of them.

All the women of Jhansi joined that program which encouraged them to rebellion movement.

The bloodshed did by Mutinies at Star Fort

Afterward, the mutinies asked British officers to drop their weapons. After surrendering and leaving arms, rebellions killed all Britishers along with their wives and children.

Those Rebellions robbed treasures and ammunition in the Fort. British Army doctor Thomas Lowe wrote that Queen Laxmi bai was also involved in the massacre.

Finally, how could these Britishers leave the chance to disrepute the Queen Laxmi bai?

After that, Rani Laxmi bai gave detailed information about incidents that happened to Erskine.

Then, the commissioner of Saugor division named Major Erskine replied to her letter.

In reply, Erskine told the queen to manage the city until the new director of the British government reached.

Army of Rani Laxmi bai successfully stopped the attempt of rebellions to occupy the Jhansi.

In January 1858, the British government declared that a military force was being sent to command the Jhansi.

However, the advisers and army of Jhansi wanted to gain independence from British rule.

Also, the delay in the arrival of the British military increased the confidence of the troops of Jhansi.

During that time, the army of Jhansi provided a good supply of ammunition and guns.

Finally, the British army arrived at Jhansi in March 1858 CE.

On analyzing the Fort General Hugh recognized that the defense system was stronger than before.

We will fight for freedom. If victory is ours, we will know the taste of freedom. And if we lose, our spirit soul will be accelerated towards God by giving life on the battlefield.

Rani Laxmi Bai herself took the lead in defense of Jhansi.

From March 1858, the English artillery began the fire at the Fort. On the opposite side, the heavy bombardment has also been done by the party of the Queen.

Most noticeably, Jhansi’s army repaired the destructed walls within one night. The Queen also sought the help of Tatya Tope.

Tatya Tope sent 20,000 troops. But the military failed to save the Jhansi.

On April 2, 1858, the British cannons finally broke the walls of the Fort of Jhansi.

Two divisions of the army entered the Fort. There was intense opposition everywhere in the Palace and outside.

Escape from the Fort of Jhansi

Meanwhile, the Queen took her horse named Badal and jumped from the castle. At that time, the horse Badal died.

Later, a group of soldiers joined the army of rebels led by Tatya Tope. He was fighting to overthrow British rule.

Under the leadership of Rani Laxmi Bai, rebellions took control over the city of Kalpi and rebuilt the fort with an excellent defense system.

On May 22, again British troops attacked. At this time, Rani Laxmi Bai led herself. But unfortunately, an army of Laxmi Bai is defeated again.

Final Struggle from Fort of Gwalior

Rani Laxmi Bai also attempted to unite the other rebels in India and use the Fort of Gwalior against the British but failed to do so.

The rebels of other groups did not agree to unite. Therefore, due to a lack of troops, the party of the queen again faced defeat.

The death of Laxmi bai is another controversial topic. Her death, according to British records, was the result of firing a pistol.

On the other hand, Queen Laxmi bai had instructed the Christian monks to set their bodies on fire.

The Doctrine of Lapse

If any of the Indian rulers were unable to maintain the state or died without an heir, then under this British incorporation policy, that state would have been abolished and came under the British East India Company.

Captured Provinces by the policy of Doctrine of Lapse

Under this policy, many smaller states were subjected to the British East India Company. This policy was strictly enforced during the reign of British General Dalhousie from 1848 to 1856.

I hope you like this Astonishing Rani Laxmi bai Biography. Please don’t forget to share this biography with your family and friends.

You can also check out the History of the popular women freedom fighters in India.