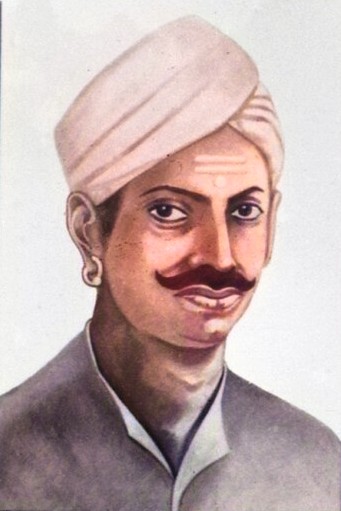 Hello friends, today here I am going to share one of the extraordinary revolutionary who identified with his work and contributions in the freedom fight of India. He was Mangal Pande, who not only did revolutionary work but also inspired youth.

If we Indians are asked to name somebody who played a vital role in India’s First War of Independence in 1857, Mangal Pandey would undoubtedly be a unanimous answer. Let us know more about such fearless freedom fighters who sacrificed his life for the country.

He was born to Divakar Pandey and Abhairani Pandey, who were landowners and belonged to an upper-caste Brahmin Hindu family. Great respect and faith were instilled in him for the Hindu religion and beliefs.

The British East India Company, which governed a large part of the Indian Sub-Continent, needed an army to protect them and their activities.

Consequently, a lot of regiments, formerly known as battalions were formed to serve this purpose. These regiments usually employed a lot of locals, especially the Brahmins. The Indian men who joined as soldiers in these regiments were known as ‘Sepoys’ in the Infantry.

However, very soon, dissatisfaction started to grow among the Indians on account of differences and unfair treatment received from the British. There were quite a few reasons for this discontent; cultural, religious and social being some of them.

The Beginning of Unrest

It is important to make a mention of what came to be known as Chapati Movement. In March 1857, Dr. Gilbert Hadow, who was an army surgeon in the East India Company, wrote a letter to his sister describing something strange that was happening in 1857 – “There is a most mysterious affair going on throughout the whole of India at present.

No one seems to know the meaning of it. It is not known where it originated, by whom or for what purpose, whether it is supposed to be connected to any religious ceremony or whether it has to do with some secret society.

The Indian papers are full of surmises as to what it means. It is called the Chapati movement.” This chapati ‘movement’ ended up shaking the British presence in India.

The situation worsened when the British brought in a new type of rifle – 1853 Enfield rifle. The cartridges that were supposed to be used in these rifles led to a huge controversy. It was believed that these new cartridges were greased with cow and pig fat.

In order to use these cartridges, the sepoys had to bite one end, resulting in the consumption of animal fat. Consuming cow fat was hurtful to the Hindus, whereas, consuming pig fat was offensive to the Muslims.

The Day of Mutiny

During this period, Mangal Pandey was stationed in Barrackpore. On March 29, 1857, he declared that he would fight against this deliberate ill treatment given by the British. He started provoking the other members of the infantry.

He armed himself with a loaded musket and invited the other sepoys to join him in the revolt. This incident was reported to the Sergeant-Major, James Hewson. On seeing him, Mangal Pandey shot at him. Hewson alerted everyone.

Subsequently, the army Adjutant (one who assists the commanding officer with the administration of the unit), Lieutenant Baugh came out to scrutinize the matter. He was informed that Mangal Pandey was in a hysterical state and was planning to shoot the first European that he spotted.

He was also said to have been under the influence of some intoxicating substances. On hearing this, Lieutenant Baugh immediately took his arms, and on his horse, rushed to the spot where Mangal Pandey was.

As soon as Pandey saw Lieutenant Baugh, he aimed at him and fired. Though the bullet missed hitting Baugh, it attacked the horse, and brought them both crashing down. After falling on the ground, Mangal Pandey attacked him with a sword and ended up injuring his shoulder and neck heavily.

Subsequently, General John Hearsey came to the ground to investigate, and claimed that Mangal Pandey was behaving as if he had lost his senses and was mad with anger. General Hearsay called it “religious frenzy”.

However, there was one soldier named Shaikh Paltu, who tried to intervene and prevent Pandey from attacking further. After his unsuccessful attempts of instigating the other sepoys to join him in the rebellion, Mangal Pandey tried to kill himself, by using his musket. He kept it on his chest and pulled the trigger with his foot. However, he did not die, but was only wounded.

Seeing this, the other sepoys came running forward and attacked the two prostrate officers. They targeted Shaikh Paltu and asked him to release Mangal Pandey, who was in Paltu’s charge. However, Paltu kept Pandey in his custody until Baugh and the officers were able to get up. Since Paltu was injured, he had to release Pandey.

When Mangal Pandey realized that there was no way to escape punishment, he tried to kill himself. He shot himself in the chest and became unconscious. However, he did not die. He was subsequently taken to prison and his trail was conducted.

When he was questioned about his objectives behind the mutiny, he admitted that it was solely his responsibility and decision and nobody or no substance had influenced him.

It is said that these were his words to the other sepoys during the incident – “come out – the Europeans are here”; “from biting these cartridges we shall become infidels” and “you sent me out here, why don’t you follow me”. He later admitted that he had been taking bhang and opium, and was not in the right frame of mind on March 29.

He died at a very young age of 29, on April 8, 1857. He was hanged to death as a punishment for his attack on two British soldiers.

It is said that he was his hanging was done soon, fearing revolts and uprising from other parts of the country. The Jemadar, Ishwari Prasad, was given death punishment and hanged on April 21. The punishment was also extended to the entire regiment. It was completely dissolved.

Repercussions of the Mutiny

Soon enough, the results of this mutiny were seen in other places. On May 10, 1857, at Meerut, 85 members of the Third Bengal Light Cavalry, who were put behind the bars for refusing to use the controversial cartridges, were released from the prison by their companions.

They looted the closest military station and killed any Europeans that they came across. A lot of other mutinies also followed this incident. Ultimately, a lot of regiments were affected due to these mutinies. This was because the British dissolved a lot of infantries before they got a chance to mutiny.

This rebellion by Mangal Pandey was considered to be the trigger of the Indian Rebellion of 1857. It was also known as the Uprising of 1857. Mangal Pandey became a prominent figure and a lot of future freedom fighters took inspiration from him.

One such figure was Vinayak Damodar Savarkar. The name of Mangal Pandey had become synonymous with somebody who revolted against the British.

A postage stamp was issued by the Government of India in the memory of Mangal Pandey on October 5, 1984. There is also a park named Shaheed Mangal Pandey Maha Udyan at Barrackpore to remember the place where Pandey attacked the British officers and was hanged later.

When you protect your country, religion protects itself.

Till today, you have seen our loyalty, now you’ll see our anger

The gun is a very unfaithful lover, anytime it can change its direction, there is no trust

Every person should safeguard his religion

Mangal Pandey — a soldier who is the national hero of India. He is best known as the man who caused the first spark of discontent in the ranks of the Sepoy and organized a rebellion.

As a result, this led to the Indian Rebellion, one of the most important events in the history of India, the main driving force of which was the Sepoy.

He was born on July 19, 1827, in Nagwe, the Ceded and Conquered Provinces, into a Brahmana family. At the age of 22, Pandey enlisted in the British Army. His distinguishing feature was his tall stature.

Mangal became a soldier in the 6th Company of the 34th Bengal Regiment. Initially, the young man was very inspired by his military career, which he considered a stepping stone to further professional success. However, over time, Mangal became disillusioned with military service.

But he managed to leave his mark on the history of India and the British Empire without having a successful military career. The fact is that in the regiments of the Indian infantry, rumors were beginning to spread about new cartridges with a shell soaked in pork and cow fat in 1857.

To load the weapon, it was necessary to break this shell with his teeth, which offended the religious feelings of Muslims and Hindus (a cow is a sacred animal in Hinduism, and a pig is unclean in Islam).

Many soldiers were convinced that the British wanted to defile their religions. Pandey, who was a Hindu brahmana, was furious with the use of fat in cartridges. Mangal decided to organize a protest.

Mangal Pandey began to operate on March 29, 1857. He incited other soldiers to revolt against the British Empire. The call for an uprising resonated among the Sepoy, and they refused to arrest Pandey on the orders of the general.

Only one of the soldiers remained loyal to the British monarchy. He was subsequently promoted in rank in recognition of his loyalty.

One of the army lieutenants learned of the uprising and rode his horse to disperse the protesting soldiers. Seeing him, Pandey fired, but the bullet passed the British officer, hitting his horse.

The lieutenant fired a musket, but he also missed. Then, Mangal attacked the British with a sword. At this crucial stage, another Indian soldier intervened and tried to contain Pandey. Realizing that arrest was imminent, Mangal decided to kill himself, but failed.

A few days later, the British decided to execute him. The execution was scheduled on April 18, 1857, but the British authorities, fearing another major revolt, hung it on April 8, 1857.

The revolt by Mangal Pandey united the Sepoy and the peasants. It provoked and accelerated the series of protests across India, the result of which was the great Indian rebellion of 1857.

This man is a symbol of the struggle of the Indian people against British rule. In recognition of his services to India, Mangal Pandey was depicted on a postage stamp in the year one thousand nine hundred and eighty-four.

The Shahid Mangal Pandey Maha Udyannazvan Park is also named in honor of the national hero. It is located in the North Twenty Four Parganas, West Bengal.

The following film is based on the biography of this Indian soldier:

The Rising: Ballad of Mangal Pandey