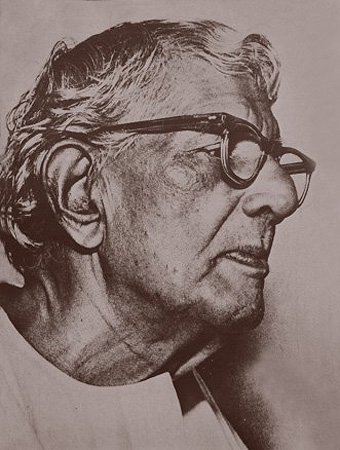 Today, I will share with you the biography of West Bengal artist Jamini Roy. He dedicated and sacrificed a lot to keep

Introduction to Biography of Jamini Roy

Do you love art? If you are, then if you don’t attract towards Indian Art then, it will be surprising. Traveling throughout India, if you went in West Bengal then you should definitely checkout their artworks. It will be definitely different experience for you. West Bengal’s most of Artist you will see the protected Jamini Roy paintings love rather than Modern artwork.

The Bankura a district’s scorched soil in West Bengal that is always praying for rain.
With its dry red-green soil will grow, Bankura one’s gave birth to flourishing folk culture. The legacy may have dried up but is far from dead. These temples that are built still maintain examples of the Terracotta art of the region. Behind much of the simplicity in paintings of Jamini Roy lies in the heritage of his house. His culture of a home in Bankura, where he had been born in the middle of April 1887.
In Beliatore Village, it was those village craftsmen who aroused in young Jamini his initial interest in design and form.

Jamini Roy was born in year 1887 in Belliatore villiage of Bankura district in state of West Bengal.

Jamini Roy’s father Ramtaran Roy was a big landowner. Therefore, his family was financially in good condition. Ramtaran Roy was also passionate about Art. When he was in government service, aiming to do something in Art he resigned from his job. So, we can say, Jamini got the legacy of Art from his father. His broad-minded dad & played very important role in Jamini’s life. He also agreed to send the son to Kolkata.

It’s said that great people give the proof of his future work in early age. Similarly, at 16 years, Jamini Roy left his home and village & went to Kolkata. In year 1903, Jamini taken admission in Government College of Art.

After admission he learns a lesson in the presence Abanindranath Tagore. Tagore was the vice principal of the College. He gave personal attention to Jamini Roy for giving prevalent traditional educational training.

Here in the art College, Jamini diligently learned and became proficient in the Western academic technique. The encouragement and admiration of Principal Darcy Brown, form the primary skills of Jamini Roy in his life.

Jamini Roy took the diploma in fine arts in the year of 1908. He became the proficient in the Modern artwork he learned in his College. But, afterwards he came to know that he doesn’t have interested in Modern style of Art. Therefore, he concentrated on Indian style without caring about the revenue & earning. Thereafter, he left college and earned success as a portrait painter in oil.

We found a portrait of Jamini Roy Painting with unique style. Jamini Roy started his career as Portrait painter on commission. But, he was not happy with his work. So, once in year 1925 he went to Kalighat temple. Outside of the temple he saw his interesting style painting.

He came to understand his aim to come here. He knew that Bengali folk art was used for three different things.

First thing is that normal people’s lifestyle business can be kept in front of World.
Second thing is that our art can be made available for anyone.

Third thing is that, World understands the Importance of Indian Art.

In his paintings, he can see the image of Kalighat’s style. He became so proficient in this style; it seems paintings are talking something with us.

Exhibition of Paintings of Jamini Roy on the Kolkata roads

In the 1930’s decade created so many popular artworks. During British rule in India in the year 1938, he became first Indian whose artwork was exhibited on Kolkata roads. In 1940, his paintings became famous among the middle class Indians. Therewithal, people of European countries also aspirant for buying his paintings. He got surprised because of that much support & popularity among worldwide people.

After some interval, his paintings representing the indigenous traditional Kalighat style as well as Vishnupur’s Terakota style of painting.

Art of Jamini Roy for Sale

Fake satisfaction with Real Self Expression

He made brilliant self-portrait in the prime of his fame as a portrait painter. When Jamini Roy saw affluence but no joy, it gave living to him but offered no life to him. A fake could satisfy the need for a mind. However, if the monotony of the regular and the desire for self-expression work.

The gap widened before the craftsmen of the village, that the folk painters of the target and the terracotta figurines of Bankura & Vishnupur transferred their souls. The moment of decision had arrived.

Jamini gave up painting contemporary portraits, preferring poverty and artwork. Even though he was married, and there were kids to grow. Jamini Roy gradually learned to unlearn his field.

Representation was not his goal; his goal was transformation. In the folk painters of Kalighat, he discovered his bold and firm sweep of detail of economy and line. When he worked in oils, themes crept in the frames of his paintings.

That is why you can see the actual transformation of art through the paintings of Jamini Roy.

And when at last, he discarded oils in favor of watercolor. The illusion of the third measurement was also rejected. Then he followed the custom of an austere market in his use of line and color.

Water-based and Tepthera pigment had opened up for him a horizon of new possibilities. But was it thought that an artist a medium for expressing European technique?

Jamini made an extraordinary collection of landscape paintings. Jamini Roy’s affiliation with the theater world of Calcutta gave him knowledge of style and pattern. After he realized the absence of technique from the bold design, the struggle with himself gained momentum.

His son Omeo scrolled to him. Who later became a handsome painter and his dedicated worker at the studio of his great father? The selection of topics was abundant and inexhaustible. Colors returned in glory. The force behind designs and his forms came from ancient myths. To which he turned for inspiration.

Consider, for example, the panels that are exquisite on the Krishna theme. Also, note with care the banners in Ramayana. Those panels on themes’ tenderness tranquility and tranquility were conveyed with equal mastery in his studies on the life of Christ.

From time to time, Jamini Roy tried his hands at wood sculpting or clay modeling and steadily pursued his interest in the varied artistic techniques of different countries. The Tepthera media withstood the test of replicating anything in Tibet and China’s gods and goddesses. To some self-portrait of Vanguard.

After years of agonizing struggle, Jamini Roy, the artist, had arrived at an international level. The spread of Jamini Roy’s fame abroad was as quickly as in his own country.

However, it was wrong to state that his recognition came from overseas. In the 1930s, a significant part of the opinion came out to support him. Notable among them were a group of intellectuals and Bengali poets who recognized the development of an artist of international stature. One of these was the poet Vishnu Dev, who had immersed himself in Jamini Roy’s paintings or art for almost 40 years.

Following the Second World War, Jamini Roy shifted from his rented home in north Calcutta. He built his studio in the less congested southern portion of the city. His residence became a home like the old days at the house to friends and art lovers.

Utilization of rock maps, woven strips of Pam leaf, or super paper board for a painting surface has been the final step to take.

In Modern World of 20th century most of painters attracted towards Modern Art. This artwork had good value & demand in Market. Painter get huge amount of revenue from such artworks. In such period he adapted Indian root of traditional art & established the importance of Indian Art in front of World.

Jamini Roy’s capacity for work never waned. An astounding volume and assortment of work marked the 20 years between 1950 and 1970. After 1950, his search for a way of saying the smoothness of color & his lines appeared to have gotten to a stage where exploration was hopeless.

Jamini Roy went one step further and broke his lines and emphasized the texture of the surface. Belying the forecast, critics promised that Jamini Roy had reached the limits of art. Lots of patches of color came to fill the surface.

He didn’t give attention to get handsome revenue. But, he kept in mind the interest of the buyer in his art. Buyers who have an understanding of art will preserve the artwork in good condition. This was the opinion of Jamini before selling each of his arts. On the Jamini Roy Paintings there was a big impact of the simplicity of Kalighat paintings.

After adapting the Indian traditional Art, he won the hearts of thousands of people. For using Indian colors and Art material he gave up the contemporary European colors and material. For giving his special contribution in Art field, Indian government was awarded him with Padma Bhushan in year 1954.

Nevertheless, he would begin painting Christ last supper. The thing he had done quite a few times previously. He would finish the drawing on the surface. That is & the colors were to come in all their splendor.

In 1970, He was 83 years old. Age had begun to catch up with him. Failing health prevented him. But sitting in his workplace, he made efforts to beat and needed to. But the fingers won’t move, and the eyes will play with cruel tricks.

However, the mingling never got going. The last super remained unfinished; the flame had settled upon Jamini’s chest, causing pneumonia. Jamini Roy survived his first attack. His second attack was acute, though the doctors were amazed by eluding death. Again, the end came in 1972, on the 24th of April. The month he had been born.