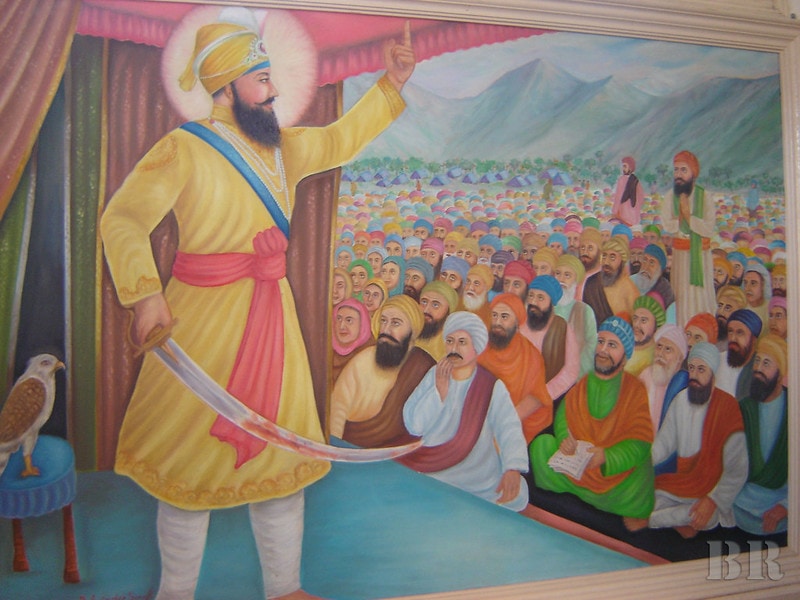 Guru Gobind Singh Ji had all the qualities of a messenger of God, a warrior, a poet and a philosopher. As a result, he gave the present shape to Sikhism with the organization of Khalsa Bandhu Varga and the conclusion of Guru Granth Sahibji.

In 1675 CE, with the request of the Brahmins of Kashmir, Shri Guru Tegh Bahadurji passed away at Chandni Chowk, Delhi. Before doing so, Guru Gobind Singh Ji ordered Gurugranth Sahib to be the next, eternal and permanent Guru of the Sikhs.

It goes without saying that, so far in human history, there has not been anyone who has lived a more inspiring life than Guru Gobind Singh Ji.

In contrast, these legislations include Sarbans Dani (kind giver, who gave up everything), Marad Agmara (a man not parallel), Shah-e-Shahenshah (emperor of kings), Bar do Alam Shah (ruler of both worlds). They are distinguished by.

“Looking at the work of Guru Gobind Singh Ji, he showed personal bravery in all circumstances regarding the use of new law for the improvement of his religion for the followers.

He showed patience and personal courage even in adverse circumstances. The rest of the people became anxious and pessimistic because of his long endurance in adverse conditions.

But in the end, he was the one who defeated the powerful enemies he had left some time ago. So it is no wonder that Sikhs respect his memory. He was definitely a great man.”

It is said that Guru Tegh Bahadur ordered his son to declare, “We will build cults and communities that will challenge tyrannical rulers to restore justice, equality and peace.” After this announcement, Guru Tegh Bahadur accepted the martyrdom.

The purpose behind the creation of the Khalsa

Purpose behind Khalsa corp was the welfare of all mankind and at the same time to raise the voice against the oppressive regime and its atrocities.

In this Khalsa Dal, Guru Gobind Singh Ji, through saints and armed soldiers, restrained the tyrannical behavior of the rulers as well as restored religiosity. At the same time, the purpose of this force was to bring the oppressed people on the path of progress.

People consider him a messenger of God and so he is a unique master. Similarly, his teachings are classical and apply to the eternal black color for all. Unlike other messengers, he never called himself God or the Son of God.

Instead, Guru Gobind Singh Ji considered all people to be children of God. Who shared the kingdom of God equally. So he used the word, “servant of God” for himself.

Going further, Guru Gobind Singh Jisays, “Those who call me God will fall into the abyss of hell. Consider me a servant of God and you will have no doubt about it. I am a servant of the Supreme God and I have come here to see the wonderful drama of life.”

Brief meaning of the writings of Guru Gobind Singh Ji

“God has no attribute, color, caste, size, character, outline, costumes, or ancestors, he is indescribable.”

“God is magnificent, fearless and infinite. He is the king of kings and also the lord of messengers or prophets. “

“God is the sovereign ruler of the gods, men, the universe and the demons.” Forests and valleys sing indescribably. “

“God, no one can tell your name. Wise people count his blessings to get their name.”

It is believed that once divine light spread in the dark night. Mystic Muslim Pir Bhikan Shah traveled in the east to Patna Sahib in Bihar (instead of west as per rules) with his followers under the guidance of divine light.

Gobind Rai was born to Mata Gujari in Patna Sahib in the year 1666 CE. It is said that Pir Bhikan Shah went to child Gobind Rai and placed milk and water pots in front of him. Both are the symbol of Hindu and Muslim religions which are the two great religions of the world.

At that time, Gobind Rai smiled and placed his hands on both the pots. Seeing this, Pir Bhikan Shah bowed happily with humility and respect to the new messenger of humanity.

Some beliefs about the birth of Guru Gobind Singh Ji

It is believed that Gobind Rai was born for sacred religious works. We find this in his autobiography, “Bachitar Natak.”

In it, Guru Gobind Rai explains how, and for what reason, God sent him to this world. In it, he mentions that, before entering this world, he was a free spirit and engaged in meditation on Hemant mountain, which has seven peaks. God commanded him to be one with God and one with infinity.

“I care for you as my son, I made you, to stop the world from doing foolish things and to establish religion.”

I stood up, bowed with folded hands and replied, “When you are supported, then your religion will spread all over the world.”

Guru Gobind Singh Ji states his purpose of coming into this world. Similarly, they say that there is a command and will of God behind for the separation of him from God.

Purpose behind the birth of Guru

The Guru says, “Tell the virtuous people here that I have come to this world with the intention of achieving the following goals. I was born to promote righteousness in the world, to liberate from slavery, to bring equality in society, and to vanish out sinners.”

In the early days of Guru Gobind Singh Ji, his father and ninth Guru, Guru Tegh Bahadur traveled from Assam to Bengal. Then in the year 1670 CE, Guru Tegh Bahadur returned to Patna. Upon returning to Patna, he first asked the family to return to Punjab.

Patna was the home and birthplace of Guru Gobind Singh Ji, where the present Shri Patna Sahib Gurdwara is located. Gobind Rai spent his entire childhood at this place.

In the year 1672 CE, Gobind Rai went for education at Anandpur (Chakka Nanaki), situated at the bottom of Shivalik. Here he wrote articles in Punjabi, Sanskrit, Braj and Persian.

At the young age of nine, his life and the future of the Sikh community took a different turn, and God entrusted him with the responsibility to lead Sikh community.

Early in 1675 CE, a group of Kashmiri Brahmins came to Anandpur under the leadership of Pandit Kirpa Ram.

Here he told Guru Tegh Bahadur ji about the situation in Kashmir. Pandit came to Anandpur to sort out and consult on what he should do in such an adverse situation.

The Mughal emperor Aurangzeb was the first in Indian history to adopt the most radical religious policy. His aim was to convert Hindus to Muslim religion all over India. For this he made Kashmiri Brahmin Pandits his first target.

The main aim behind it was that converting Kashmiri Brahmins would make it easier to convert people from other parts of India.

The Mughal government gave them six months to either convert otherwise to tolerate the consequences.

While Guru Tegh Bahadur was worried, the younger Gobind Rai came there with his companions. Gobind Rai asked his father why he had a feeling of anxiety on his face. According to Kuir Singh’s Gurbilas Patshahi 10, the father replied,

“The grave is a burden carried by the earth. The erosion of the earth caused by that burden can be fulfilled only when the right person comes in front and gives his head. After that, disaster will end and ultimate bliss will be attained.”

Gobind Rai said with his innocent sense, “There is no better and right than you for this sacrifice.”

Several months later, despite the lack of logistics, the Guru and his followers fought fiercely in a prolonged siege. The people (Sikhs) trapped in the siege were desperate, and the siege makers (Lahore governors) were also astonished by the Sikh courage.

The besiegers had sworn with hands on the Quran, promising to let the Sikhs go safely when they left Anandpur. Finally, one night in December 1705, the entire city was evacuated. But as soon as the Guru and his Sikh followers came out, the hilly invaders and their Mughal allies attacked them.

Betrayal of Sikhs by Mughals

In the ensuing Sikhs many Sikhs were killed and the Guru’s literature was destroyed along with many valuable manuscripts. The Guru himself managed to reach the village of Chamkor, forty kilometers southwest of Anandpur. In which he had 40 Sikhs and two of his children were present.

The royal army followed them and immediately captured them. His two sons, Ajit Singh (born 14) and Zujhar Singh (born 1891) and 5 Sikh chieftains, were caught in action on December 7, 1705. The 5 surviving Sikhs advised the Guru to protect himself in order to revive the Khalsa Panth.

Guru Gobind Singh Ji along with his three Sikh followers managed to escape into the jungles of Malwa, and two of his Muslim followers, Gani Khan and Nabi Khan, helped the Guru by putting his life at stake.

The two youngest sons of Guru Gobind Singh Ji, Zhorawar Singh (born 1696), Fateh Singh (born 1699), and his mother Gujri ji were also taken out from the siege. But his old servant Gangu conspired to take him to the Sub-Inspector of Sirhind. Due to this, he was hanged on December 13, 1705. Grandmother of Guru Gobind Singh Ji also died on the same day.

Guru Gobind Singh helped the eldest son of Emperor, who was a liberal, to help Muazzam. The Sikhs took part in the battle of Jajau (June 8, 1707) to help on behalf of prince Muazzam. At the decisive moment, this battle was won by the prince and the Rajput was named the prince as “Bahadur Shah.” The new emperor called Guru Gobind Singh on July 23, 1707 to Agra for discussion.

At this time, Emperor Bahadur Shah was preparing to go against the Kachhwa Rajputs of Amber (Jaipur). Also, his younger brother, Kamabakhsh, who was in the sanctity of the rebellion. The Guru was with him, and history tells that the Guru addressed the gathering of the people according to the teachings of Guru Nanak Dev Ji. The two armies crossed the Tapi River in June 1708 and the Banganga River in August and reached Nanded on the banks of the Godavari in late August.

Meanwhile Bahadur Shah departed to the south, Guru Gobind Singh decided to stay in Nanded for some time. Here he met Madho Das, a slave Bairagi (a person different or detached from the world), who was initiated by the Guru by the Guru and renamed him as “Gurubaksh Singh” (popularly known as “Banda Singh”). Guru Gobind Singh gave his 5 arrows to Banda Singh. Guru Gobind Singh Ji given his 5 Sikh disciples and the guide. The Guru ordered them to go to Punjab and asked the local rulers to fight against injustice.