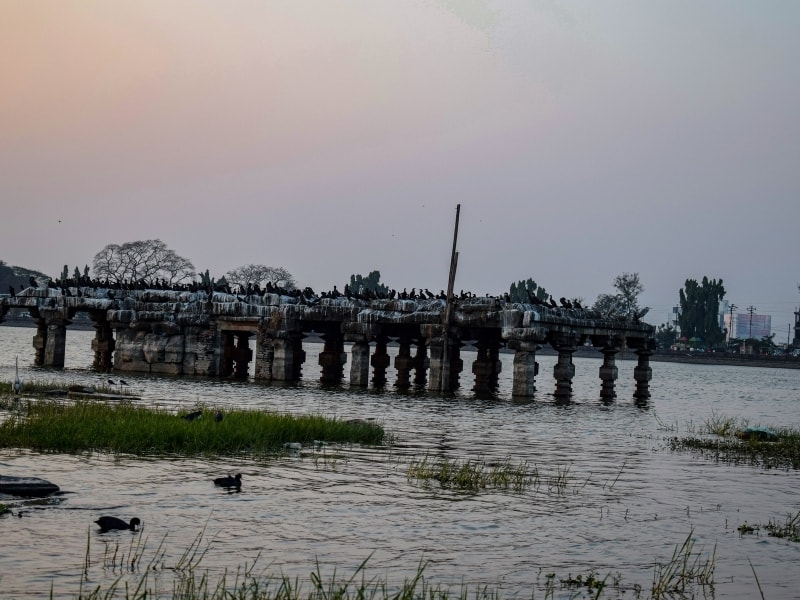 Hello guys, today I am here to share the eye-soothing lake of Kolhapur. The surrounding structure enhanced its beauty. Yes, you guessed right; it is Rankala Lake of Kolhapur. Rajarshi Shahu Maharaj built that structure.

Introduction to the Rankala Lake of Kolhapur

Rankala Lake is one of the popular attractions and recreation center. At evening experiencing its beauty is really soothing and calm experience.

In monsoon season the lake is at its peak of beauty and attracts massive crowd. The lake is around 35 feet deep and area is around 3 miles. Picturesque lake view with gardens around makes the mind delightful and peaceful.

According to bl.uk, Sandhya math is a hall formed from the structure of pillars of black stone slabs. It is located at northern bank of Rankala Lake. It goes completely underwater during monsoon season.

But, you can see it completely in summer season when water at lowest level. It lies on the south-west direction of Kolhapur city and to the northern end of the Rankala lake.

Rankala Chaupati also famous for its street food. So, if you are foodie like me then, you may definitely like snakes at Chaupati. There variety of food snacks available from which Ragada Patties and Bhel-puri is my favorite.

Kolhapur city was the production house for most of the Marathi cinemas. Also, numerous Hindi movies have been filmed in ShantKiran studio located at Rankala Lake. Vanakudre Shantaram was the owner of that studio. That time was memorized as golden past of Indian History.

Where is Rankala in Kolhapur?

Rankala was dig as a stone quarry before 8th century as there was a massive mine of black stone.

According to Wikipedia, the lake was formed naturally due to earthquake happened in between 800-900 AD.

During the earthquake, the stones quarry damaged extensively, also some geological changes happened.

It enabled the water came out of holes from underground source and gather at surface.

He also developed gardens surrounded to lake which added astonishing beauty to it.

Before formation of this beautiful creature, there was only stone quarry. That time, a stone structure called as “Rankala.”

After natural disaster happened, the formed lake was called as “Rankala Lake.”

How many lakes are there in Maharashtra?

According to MaharashtraTourism, Maharashtra have total 23 lakes. Additionally, the Thane city was identified as “City of Lakes.”

The Shalini Palace was constructed in 1931-34 and named after princess Shalini Raje of Kolhapur. The Palace was converted into 3-star hotel in 1987 but due to major losses it has been shut down in 2014. You can see its wonderful view from Rankala lake garden or Rankala Chowpati.

On the northern side of Rankala lake there is a royal Shalini Palace added unbeatable beauty to the view. According to Wikipedia, it is hard to believe but its only star-rated palace hotel in Maharashtra.

On the south-east direction of lake there is Padmaraje garden.

Mahalakshmi Temple of Kolhapur was one of the most famous temples in Maharashtra. It is located at center of the city Kolhapur. The temple is dedicated for Goddess Parvati (Durga Mata).

According to Ashta Dasa Shakti Peetha Stotram and Skanda Purana, it is one of 51 Shaktipeethas and one of 18 Maha-Shaktipeethas.

It is one of the old lakes present in Maharashtra. People give more importance to the place mostly because of there was a large Nandi temple. Some people believe that the Nandi moves each year slightly from its place.

Maratha ghat and Raj ghat are the two places where you can reach at the water of lake. You can see the grand tower at Raj ghat.

This spot is popular because here many movie shootings happened. Just in front of that tower the Shalini Palace and also Ambai swimming tank is located.