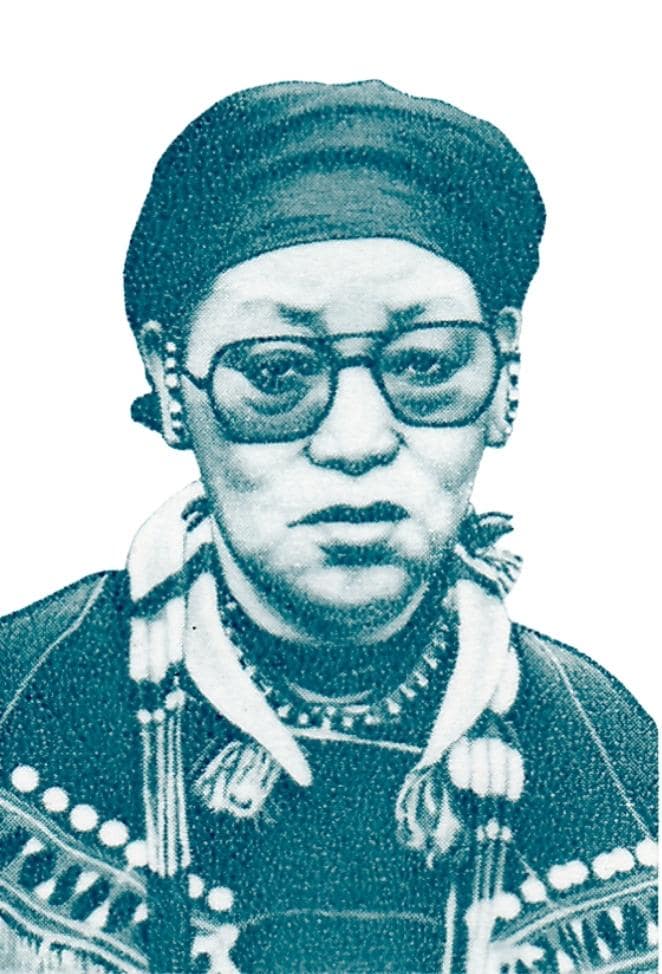 Today we discuss the interesting life story of yet another legend. Rani Gaidinliu, A political activist and a spiritual leader, was among the few brave women who stood firm and fought against the British administration in India.

One of the most interesting facts about Rani is that she joined the British rebellion at a very tender age (13 years). Her bravery and courage saw her assume the position of a leader. She led and administered the Heraka Movement and constantly pushed initiated revolts against the British administration.

At 14, her rebellious character became unbearable to the British administration. This saw her imprisoned for a whole 14 years. She served her imprisonment and they released her later after India got its Independence. In return for her courage and willingness to suffer for her people, she received the Padma Bhushan award.

She was a champion of fair treatment and liberty. Even after she was released from prison, she continued to campaign for freedom. She was constantly working and fighting for the betterment of society. Nehru refers to her as the “daughter of the hills.” Rani was given the name because of her bravery and determination.

India’s government established a few monuments in her honour to commemorate her heroic deeds. These include a park with a beautiful statue erected right within it.

Her Birth and Early Life

Rani Gaidinliu birthday was on the 26th of January 1915. Nungkao, also known as Longkao, was her birthplace.

She was so courageous from childhood and even involved herself with politics and fighting for freedom at a very tender age. At 13, she was already a religious leader helping out Haipou Jadonang. She made her assistant in all her political movements and religious missions. That was impressive.

She Joins the Rebels Against the British

Her association with Jadonang gave her a firm foundation for becoming a fierce and determined rebel against the British administration. When Jadonang passed on, she relentlessly assumed leading the Movement solely. She slowly transformed the religious Movement into a political movement.

She didn’t hesitate to initiate a very serious rebellion against the British. Even after her pioneer died in the hands of the British forces, she never gave up on fighting for freedom. As a result of her stubbornness to the British government, she got life imprisonment even though they released her later after they regained Independence.

At some point, Rani went missing in action. She hid out in fear of being arrested by the British forces. The British administration offered a ransom to anyone who would reveal her secret hideout. The villagers loved her and solidly stood for her. No one volunteered to set her up even after the British promised the huge reward. However, she was later hunted down and apprehended.

Her Life in Prison

As historical records have accounted for her life, Rani Gaidinliu remained in prison until India gained Independence. Even though the punishment was originally life imprisonment, that was quite a long time. During the time of her imprisonment, she served in different jails. These include:

After her arrest and imprisonment, her close associates lost hope and others were killed in the process. These happenings brought about the decline and downfall of the Movement. Two of her last followers were later arrested and put in prison in 1933.

Jawaharlal Nehru Visits her in jail

During his tour to Manipur, Jawaharlal Nehru visited her while in jail. This visit happened around 1937. Jawaharlal had a one-on-one conversation with Rani, and he promised to push for release as soon as possible. Later on, he wrote a statement praising her bravery and lamenting her pathetic life in prison. He even promised the people of India that one day they would remember her for the good deed and courage to stand against the British empire. The Hindustan Times then published the statement.

Since this statement was published, Rani was given the title of the Rani of Nagas after that. Also, in his pursuit for the release of Rani, Jawaharlal wrote a letter to the British MP called Lady Astor. He begged her to have mercy on her fellow woman and help push for her release. However, the Indian State Secretary rejected the request because she would cause more trouble once released.

Life in prison was never easy for Rani, as expected. Life in the dark was traumatizing, but she remained strong and hopeful. Her spirit to fight for freedom did not die in prison. After her release, she still revived the Movement and continued with a campaign for freedom.

Her Life After Imprisonment

On the 24th year of imprisonment, the prime minister ordered the release of Rani Gaidinliu. This time, India had just gained its Independence (1947). This happened as a fulfilment of the promise the prime gave out to her when he visited her in prison.

After her release, the state government had placed restrictions for her not to go to her home village. This forced her to stay with her younger brother, Marang, at Vimrap Village on Tuesday. She stayed here till 1952. Rani Gaidinliu then moved to her home village, where the Prime Minister, Jawaharlal, visited Imphal. This was the second time he saw Rani. This time out of prison.

Rani was not well known among the various Naga groups. Those who had converted to Christianity, in particular, did not want to be associated with her. They felt like her Movement was an anti-Christian program orchestrated to overthrow Christianity in the region. And so, most of them developed a hatred for her.

She was among the few freedom fighters in India

Rani was one of a kind female freedom fighter. She got into the opposition campaigns at a very young age. At 13, she had joined Jadonang to fight against the British administration. Many didn’t expect a 13-year old girl to be involved in such matters? No one. However, Rani ignored her tender age and kept pushing for her dream and vision to send away the British and get back India’s freedom and Independence.

She was a Music Composer

Another fact that not everyone knows is that Rani was a fan of music. She used to compose amazing songs and sing them. She had written over a hundred religious hymn songs by the time she died. Today, people play these songs for different events and occasions.

She was a very religious woman

Rani Gaidinliu was very religious and always fought to see her native religion tall. She had to urge her village people no0t to take on with the foreign religion.  Rani perceived the foreign religion—Christianity as a toll that the British administration was using to cause separation among the Indian people.

She was never married

She sacrificed her normal life for the freedom of her people. As a typical girl, everyone expected her to anticipate marrying and having children. However, her case was different. She had some cheerful dreams of fighting for freedom and Independence. She dedicated her marriage life to fighting for freedom which she considered more important than just getting married and having children. After all, what is the essence of bringing forth children in a scattered and colonized land?

Just like any other freedom fighter, Rani Gaidinliu has several achievements she made before she died. These include the following:

She became a leader at 13 years old

Rani started to pocket her achievements right from her childhood. First of all, she decided to join the political arena at a very tender and started fighting for freedom. That was a great achievement. Rani always dreamt of being a freedom fighter and achieved her first step of fulfilling her dream at the age of 13 years when she joined Jadonang in the rebellion movement against the British.

She contributed to the struggle for India’s independence

She contributed to acquiring Indian Independence. Even though she didn’t do it solely, she played a major part in achieving, making it her achievement equally. She endured a great deal for the sake of her homeland’s independence. The British administration imprisoned her and she served in several jails until finally, India got its Independence in 1947.

She Survived the Imprisonment

She survived the jail, hard life and suffering. Jail is one of the darkest places you can be on earth. Rani stayed there for 14 years. Imprisonment deprived her of total freedom and served her sentence with hard labour as a woman; everyone expected that she would die in jail due to hard conditions. However, as the fighter she always was, rani managed to adapt to jail life and surprisingly came out sound and safe.

She took over the Heraka Movement Leadership after Jadonang

She decided to take over the Revolution’s leadership after Jadonang died. Even though she knew the British administration had executed her Godfather, she did retreat; rather, she kept fighting against the British to see her land getting her freedom back.

She was a spiritual as well as a political figure. Managing both realms was a great achievement she made. I mean, she balanced them both, and none fell out of place.

She Got several Awards

As a normal human being, she was destined to die at some point. It’s a life passage rite. After being released from prison, Rani Gaidinliu did not go straight to her home village. She stayed in a different locale with her younger brother.

However, after some time, they permitted her to return to her home village in 1991. On the 17th of February 1993, Rani Gaidinliu passed away. She was 78 years old by the time she died.

Her burial was among the most attended in India. Thousands of people, including prominent government officials, attended. They buried her at Longkao, her home village. The state government declared a general holiday to remember and celebrate her legacy in her honour.

Her legacy indeed completes history. Historical records have it that her heroics went unrecognized among the Naga tribes. This was because her religion didn’t match their desires. Most of the Nagas had chosen Christianity as their sole religion by the 1960s. Her Movement was quite hostile to Christians, so they hated her and chose not to recognize her as their hero.

The Naga patriot groups don’t honour her in any way either. This is because many viewed her as a close ally of the Government of India. By the time the Hindu patriot Sangh Parivar lined up with the Heraka movement during the 1970s, the discernment that she was promoting Hinduism developed further among the Christian Nagas.

So, when the National government and T. R. Zeliang’s state legislatures formed a Gaidinliu commemorative lobby in 2015, some few Nagaland common society associations opposed the move.

However, Rani Gaidinliu remains a hero among the Indians. She was a fighter who always dreamt and sought to retrieve back the freedom of the Indians from the British administration. Rani served 14-year imprisonment suffered behind cell bars for India at large.

Gaidinliu chose to stay unmarried and without children to have ample time to concentrate on leading the Heraka movement in opposing the British. She lived a selfless life to see India acquire its Independence.